Oh my goodness it's been a couple of weeks since I've posted anything new...sometimes life just gets way too crazy, so I'm extremely happy to have a quiet couple of days this weekend. 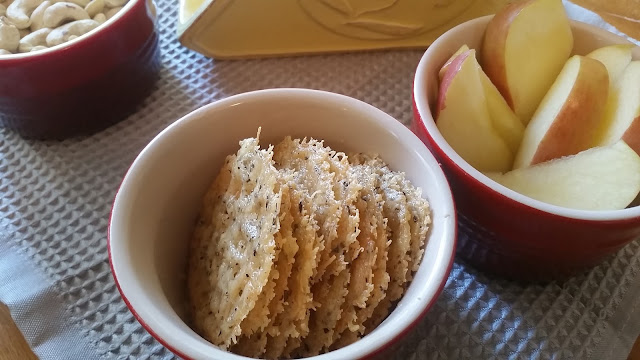 I've been playing around with Frico, which are basically just grated cheese crisped up in a pan or in the oven. The oven saves a bit of time over doing them one at a time on the stovetop, but I suppose you could make more than one at a time in a pan if you did them small like this. You can buy them at Costco or Whole Foods, but if I go to Costco I'll buy a bunch of other stuff I don't need and WF sells them for $7.99 for 3 ounces. I'll stick to making them at home!

I tried a few different kinds of grating cheeses, Parmesan, Romano and Asiago, and while they taste a little different, they all make really great little snacks. Mixing them tastes really good, too. 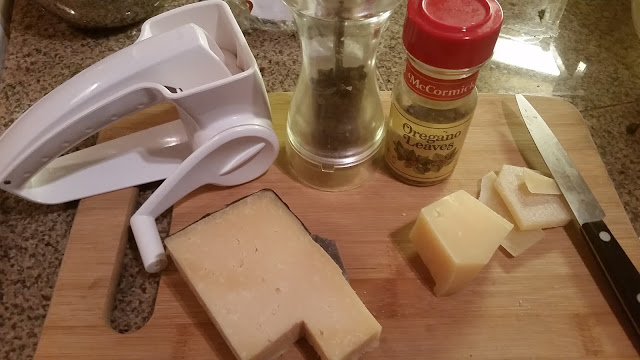 Plain Frico is great, the perfect one-ingredient recipe. But I decided to try it with oregano first, and then added black pepper, too. Cut the rinds off of the cheeses you use and save them for making soups and stews (but throw away the wax part if there is one, of course). You can use pre-grated cheese, but the texture might be off a little depending on what additives they put in the container.


For every cup of grated cheese, use 1/8 tsp black pepper and 1/4 tsp oregano. 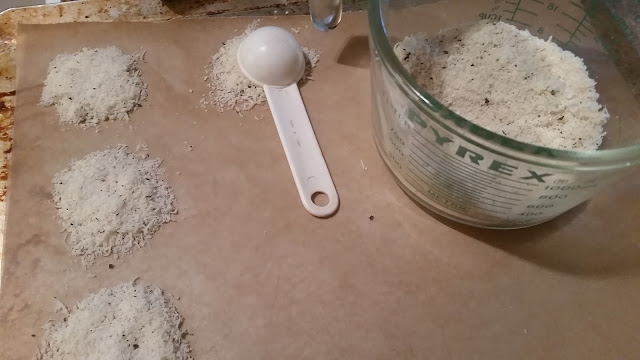 Line a baking sheet or two with parchment paper or a Silpat thingy. I have two of those, but my cleaning goddess thinks they look nice on top of the rolling dishwasher, where I keep a lot of my small appliances, so I'm leaving them there for now.

Use a tablespoon to put little mounds of the cheese and spices on the baking sheet. Press down on the mounds to make them even and space them out a little. Pop them in the pre-heated 375 degree oven and set a timer for 5 minutes. Check to see if they're evenly golden brown, and if they're not, put them back in for another minute. Repeat the checking. If there's a little white left, those spots will be more chewy than crispy, but I kinda like that. The one on the right had a little chewy area. Yum. 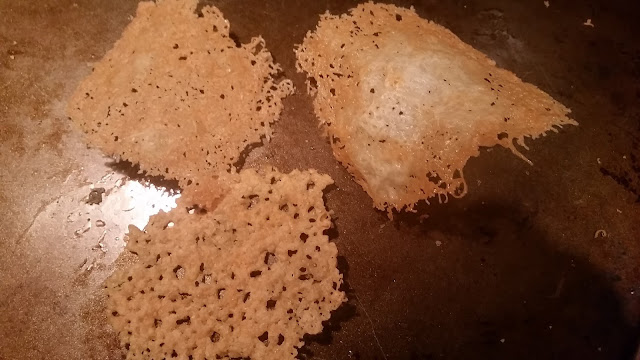 The pic above is of some larger ones I made. You can shape the Frico like these by putting them over something round like a rolling pin immediately when they come out of the oven, or just let them cool in their flat shape. When they're cool, enjoy them for a mid-afternoon snack or with a cocktail! This little guy liked the plain ones I took to the picket line on Wednesday! 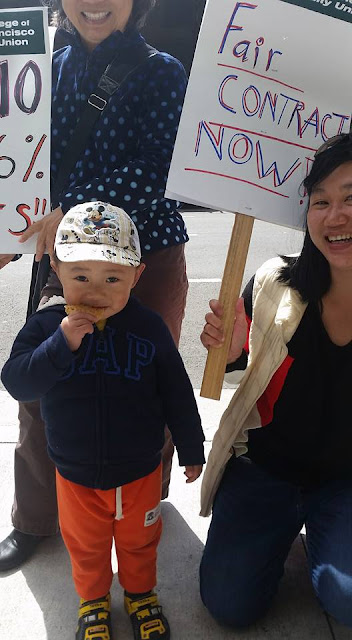