A wine bar near me used to have Cassoulet Nights. Since I got my Instant Pot, I'd been thinking I could make a cassoulet in it...but once I found and bought some of the traditional ingredients, I did more research and realized I couldn't. Yes, you could toss all the stuff in there and set it for 40 minutes and have something really delicious, but it wouldn't have the same flavor dimensions of the real deal. However, as there are many steps in the process, the IP helped me with two of them. 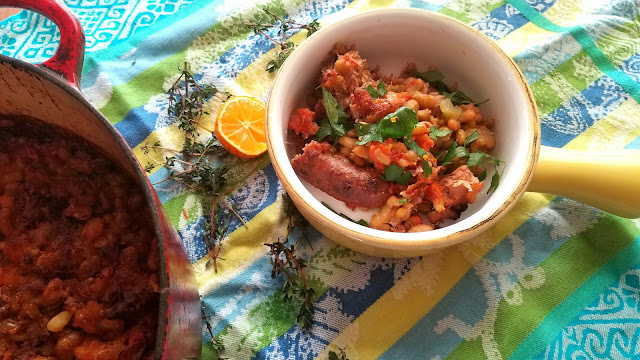 Cassoulet is made with different meats in different cities, as it was once an inexpensive dish that used whatever was readily available to people in that area. Once upon a time, duck confit was a necessity for French people trying to make it through a pre-refrigeration winter. Today, it costs a fortune, so although I love it, I opted for the Toulouse garlic sausages (slightly less expensive) and pork shoulder (a lot less expensive). They're hard to find, though, so feel free to use another kind of sausage you like, even chorizo if you like some heat.

It can be put together in a day, but dinner might be pretty late so it's best to break it up over two or three days. The three main steps are: cooking the beans, cooking the pork, and baking the cassoulet.

For the beans, you'll need 1 lb flageolet or navy beans, 3/4 tsp salt, a few sprigs of thyme, a bay leaf, a small shallot, and 1 or 2 garlic cloves. You can wrap up the seasonings in a little cheesecloth, or just plan to fish them out one by one. 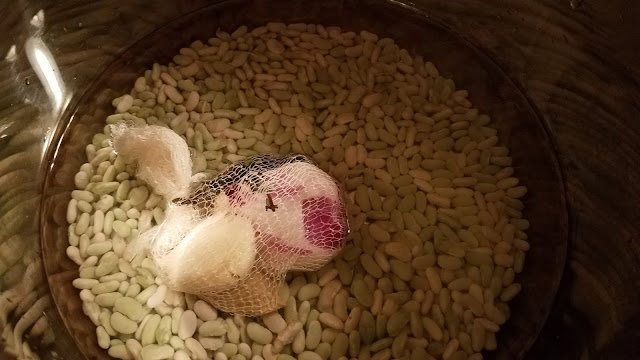 If you use the Instant Pot, cover the beans with another inch or so of water. Set the pot on high for 21 minutes for flageolet beans or 20 for navy beans, which are a little smaller but a lot cheaper. Let the pressure release naturally for another 15-20 minutes, then release any remaining pressure with the valve and put the beans and their liquid in something to store them in the fridge overnight.

You can also soak the beans overnight and simmer them for about 45 minutes, or cook them from dried for about 2 hours. 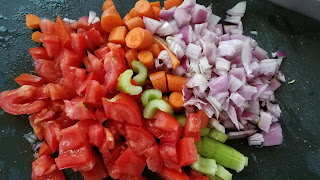 Cut the pork shoulder into roughly three inch pieces. Chop the vegetables, not too finely if you're using the Instant Pot. Put the pancetta and oil into the Instant Pot and then push the saute button. Starting from a cold pan allows the fat to render out better. Stir when the bottom bits are nice and brown. Remove the browned pieces and place in a small bowl, then add all but 1 Tbsp(ish) of the fat from the pan to the bowl. The fat will really flavor everything...and I'm using way less than most recipes. A lot of them call for duck fat and/or salt pork. It's just starting to render out here... 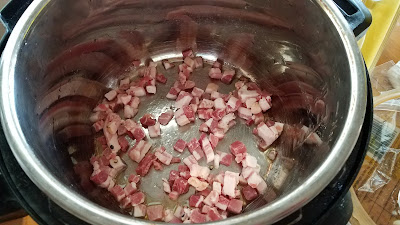 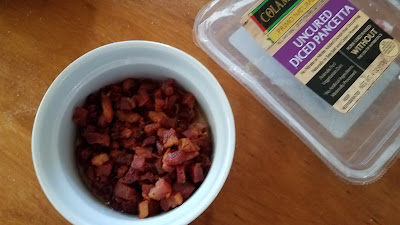 Add the sausages in to brown those on two sides. You don't need to cook them through because they'll finish up in the final, lengthy, baking. 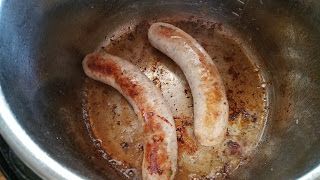 Remove and set aside. Put the shallots, carrots, and celery in the pot and stir with a wooden spoon to move around and scrape up the brown stuff from the bottom. When the vegetables start to soften, add in 1 cup chicken broth (or water, or white wine). Stir a little more, then add the tomatoes and pork. If there's a bone, add that, too. Close the lid and set IP for 25 minutes high pressure. Once it finishes the time, allow another 15-20 minutes for the pressure to release naturally. If you release the pressure right away, the meat will be tough. 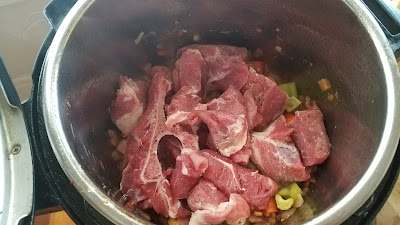 You can let the meat cool, refrigerate it and assemble the next day, or you can get to step three now. 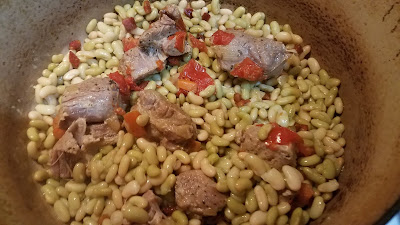 Pre-heat the oven to 300. Layer half of the beans in a heavy, oven-proof pot. Sprinkle half of the pancetta over them. Remove half the chunks of pork and add to the pot, then some of the vegetables from the pork cooking, then another layer of beans and pork. Layer in the sausages somewhere along the way and pour any remaining pancetta fat and vegetables/liquid from cooking the pork over the top. Add some chicken broth and some water or bean cooking liquid to just cover the beans. 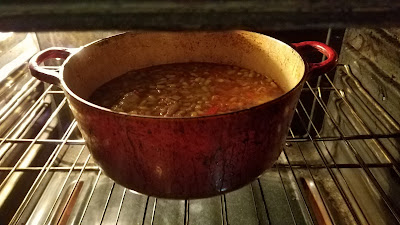 Put in the oven, uncovered, for what will be a total of 4-5 hours. Yup, you'll have to smell it cooking for THAT LONG. You can blame Kenji from Serious Eats, as I took the timing from him. After two hours, there should be a little bit of a crust forming. Tap it and make a hole in it. Add a little more liquid through the hole so you don't re-hydrate the caramelized bits on the top. After that, check again every 30 minutes for 2-3 more hours, adding more liquid if the beans are dry in the middle. The crust will provide some texture so that you don't need bread crumbs, and may even get very dark, which is OK, but I don't think the size of my pan will let that happen.  Serve hot with a little fresh parsley and grated lemon zest...and don't forget the medium red wine! 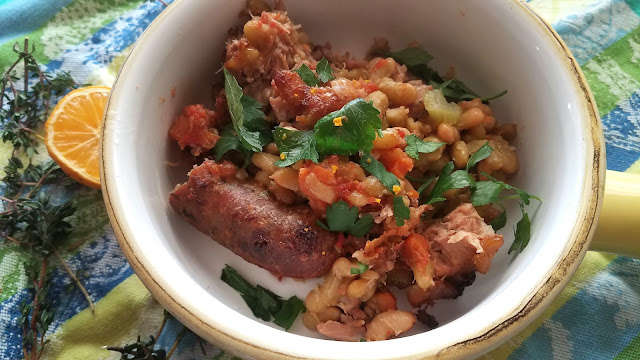 Save recipe image to print from your computer. 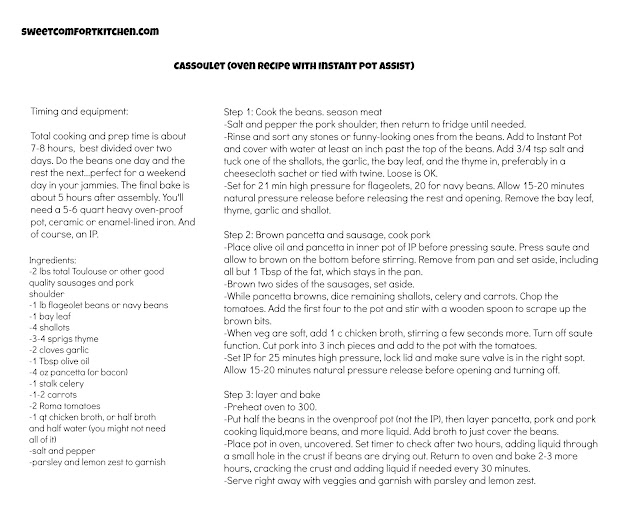